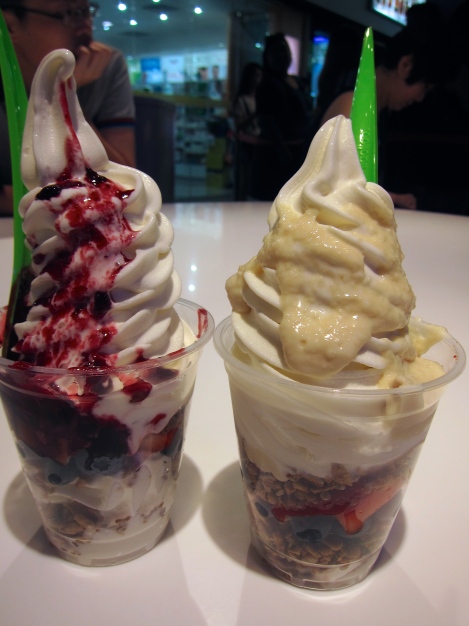 I have no idea why Llao Llao is so popular right now! I remember having it a couple of years back with the bf, only because it was half price on National Day. Fast forward to today, there are 15-20 minute queues at the 313@Somerset outlet… and I queued for it LOL. I can’t believe myself too! But I was having a froyo craving and I wanted to revisit this and see what was so good. It has since shrank, and being a very obviously greedy person, that upset me!

This is the very Instagrammable Sanum ($6.50) that most people get. You pick a sauce, a crunch and 3 fruits. That’s good because toppings are usually so expensive. I liked the raffaelo sauce, which is white chocolate with coconut and cookie crumbs. If I eat this again, I’ll have it with the surprisingly yummy sauce! I’m not a huge fan of the froyo itself though, which was a bit too sour and thin for my liking. I like Yoguru the most!!

And then on a more recent occasion, my friends got another cup to share while we were at Marina Square. We picked the rum and raisin sauce, which was the worst choice you could make in that shop because it tasted like cough syrup. No joke. I’ve never wished less sauce or less toppings atop my froyo but ugh that was just super bad, we were all cringing our way through the cup! We decided to delete the photo of the froyo but I’m sure that froyo’s etched in our minds. 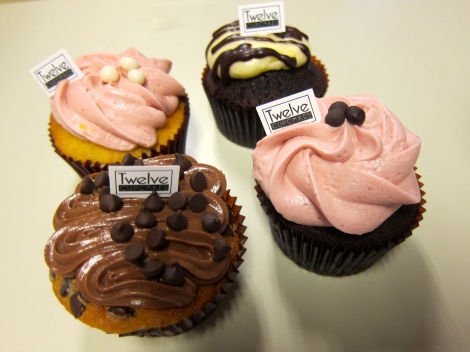 This was a funny story. I was sitting in the basement of Changi Airport with my dad, while my brother was socialising in the departure hall. I bought bubble tea after dinner and then the Twelve Cupcakes girl came around and gave us cupcakes. I said no thanks but she insisted I took some and put it all on my table. I obviously have a greedy face!!!!

But anyway. I like Twelve Cupcake’s Red Velvet. It is moist with a fine crumb, and has a rich cream cheese topping which doesn’t hint too heavily of icing sugar. Just cream cheese. It’s good!! So have that. But I wouldn’t recommend the rest. These were all forgettable. Also a little pet peeve, but their variations of flavours come from varying the icing rather than varying the bases itself. For instance, strawberry chocolate is just the same generic chocolate cupcake with strawberry flavoured frosting, rather than a chocolate cupcake bursting with fresh strawberries. It’s a little dull, and it isn’t that good, so I suggest you just… drink bubble tea.

Okay end of my little rant about these brands you can find everywhere!